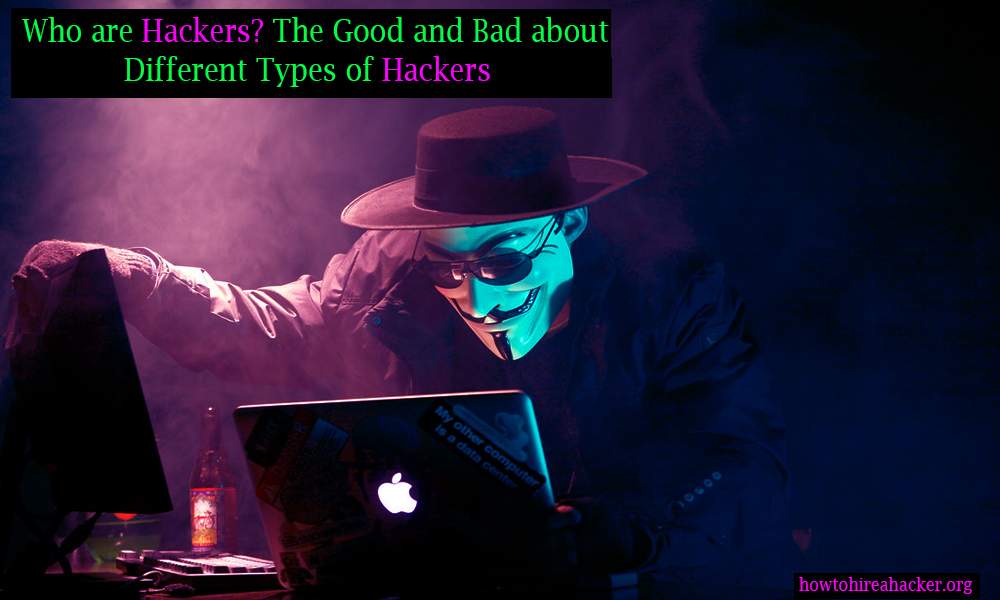 There is a range of definitions for what and who hackers are, but these days most people understand that hackers are people that access information and computer systems that weren’t intended to be accessed by them.

Hackers can be inquisitive and not intend any harm or malicious intent, while other hackers may be looking for financial gain or even to cause significant digital or physical damage through their hacks.

Some hackers may even be getting paid for what they do in corporate espionage or as part of a government-sponsored hacking program.

Who are hackers? The answer is that there are many different types of hackers, with some doing good, and others looking to do bad things with systems or information that they access.

Who are White Hat Hackers?

White Hat hackers are cyber security professionals who are paid by businesses or government organizations to find vulnerabilities or issues in computer systems, including software, hardware, and the networks the systems run on before other hackers can exploit vulnerable systems.

A White Hat hacker will perform penetration testing, review configurations for known issues, and may even write custom code to exploit vulnerabilities that they’ve found.

A full report is presented to the employer with options on how issues can be fixed, and in most cases, if something new is found in their hacking efforts, they will present the information to vendors to fix with their employer’s permission.

Who are hackers that are considered White Hat? They’re your protectors, keeping your information safe from other hackers and ensuring that computer systems stay up and working effectively.

Who are Black Hat Hackers?

A Black Hat hacker may perform the exact same types of penetration attempts that White Hat hackers do, but there is no authorization to do so.

The information gained by Black hat hackers could be used for identity theft, accessing financial accounts to steal money or anything else that results in a benefit to the Black Hat hacker.

Who are hackers that are considered Black Hat? They’re the bad guys that you envision when you think about what a hacker is, and their motivation is personal gain.

Who are Grey Hat Hackers?

Grey Hat hackers can be a mixture between Black Hat and White Hat hacking. The goals of the hacker are to find vulnerabilities in computer systems that they have no authorization to access, but there is no specific malicious intent involved.

The Grey Hat hackers may simply do it for fun or may be looking for a reward by telling the owners of the system about the vulnerabilities or issues. This could be considered an application for a job or an independent consultant.

The problem lies in their lack of authorization, and they can face the same penalties as Black Hat hackers, even if there is no intention for personal gain or malicious actions.

Who are hackers that wear a Gret Hat? They make up a large chunk of the hacking community who simply hack for the enjoyment or thrill of the hack.

Who are Green Hat Hackers?

Green Hat hackers are computer enthusiasts that are looking to gain the necessary skills to hack computer systems, they may end up becoming any other type of hacker once their skills improve and they gain experience.

Typically this type of hacker doesn’t go out into the wild and cause problems or gain access to systems. They’re reading, learning from other more advanced hackers, and trying to hack systems that they do have access to while they test their skills.

So, who are hackers with a Green Hat? They’re the newbie hackers that have the potential to help organizations or, with a wrong turn, may end up becoming Black Hat hackers.

What are Script Kiddies?

Script kiddies are hackers as far as the law is concerned; however, they are less concerned about learning computer systems and will simply reuse exploits or known vulnerabilities to systems to gain access.

In most cases, their goal is illegally accessing systems for some type of gain or malicious intent; this could be free access to a service or defacing a website they don’t like.

A script kiddie is often at the bottom rung of hackers and will visit websites that provide exploitation code; they will then search for systems they can exploit or wait for a vulnerability against a system or software they need.

Who are Blue Hat Hackers?

Blue Hat hackers are actually two completely different types of hackers, depending on who you’re asking, so it’s important to differentiate or take cues from the situation to understand which is which.

A Blue Hat hacker may be somebody employed to test vulnerabilities on computer systems or software prior to launch by a business to ensure that there are no obvious or problematic vulnerabilities for a new product. In this regard, they can be considered White Hat Hackers specifically for new products.

However, a Blue Hat hacker can refer to a Script Kiddie that has malicious intent towards a specific person or organization. They may have enough skills to slightly modify code to work in different situations.

Who are Red Hat Hackers?

Red Hat hackers are hired by organizations to defend against Black Hat hackers and to actually be proactive in going after other hackers attempting to penetrate computer systems.

Unlike White Hat hackers that are simply testing an organization’s computer systems and reporting on vulnerabilities that need to be resolved, a Red Hat hacker will work against anybody attempting to access the systems with the goal of stopping them and tracking them down to either pass along to law enforcement or to inflict damage on the other hacker’s systems.

Who are hackers that consider themselves to be Red Hat? They are typically hired by government organizations to protect national infrastructure and go after the hackers attempting to gain access or cause problems, they’re reverse Black Hat hackers.

What are State Hackers?

State or Nation Hackers are hired by governments to penetrate other countries’ computer systems or national threats. Their goal is to gather information on potential threats or simply to gain access to spy on other countries.

A State Hacker may also work to cause problems for the national infrastructure of another country or may be looking to steal information that another country possesses, such as plans for something new.

Who are hackers employed by the state? They provide hacking expertise for almost anything that a country requires, whether that’s information gathering or malicious actions to cause issues within another country.

Hacktivists are hackers that penetrate government or organization computer systems with the ultimate goal of bringing attention to a specific issue or cause that they believe in.

The intention of a hacktivist isn’t financial gain but may involve malicious intent towards the organization they’re hacking. They may deface websites or steal information to be shared publicly that an organization may not want to be shared.

So who are hackers that identify as hacktivists? They’re cyber protesters looking to initiate change or stop something specific from happening and work against a specific organization that they believe is in the wrong.

Who are Dark Web Hackers?

Dark Web hackers sell their hacking skills to anybody that needs something hacked; their skill levels may vary from basic script kiddies to black hat hackers to even elite hackers. The cost for a Dark Web hacker will increase the more skill you require.

Due to the illegal nature of the hacking required, you’ll find these types of hackers selling their services on the Dark Web through marketplaces or known hacking communities that you’ll need to hunt for.

Who are hackers on the Dark Web? They’re hackers for hire, and generally, it’s for private citizens rather than organizations that want access to specific information or to modify certain information.

Cryptojackers are cybercriminals whose goal is to install software on computer systems so that they can steal resources and mine crypto. While they’re not looking to steal information or have specific malicious intent toward who they’ve hacked, they are illegally gaining access and using resources.

On a small scale, crypto jacked may be a script kiddie that is just trying their lack, or they may be a full-fledged Black Hat hacker accessing corporate systems and utilizing computer systems, and slowing down the running of authorized users and activities.

Their goal is simply to mine crypto, which can also physically damage the computer systems they’re running their software on.

Who are hackers that are cryptojackers? They are hackers that illegally gain access to multiple systems in an effort to install software that allows them to mine cryptocurrency for financial gain.

Who are Crypto Hackers?

Crypto Hackers are a newer type of hacker that focus on the financial gain by hacking cryptocurrency exchanges, bridges, or private wallets. They require the skills to hack the systems and the knowledge to move their bounty and hide it so it can’t be recovered.

While many different types of hackers may have the skills to hack cryptosystems, it’s the hiding and moving skills that differentiate a successful crypto hacker from the rest.

What are BotNet Hackers?

BotNet hackers use malware to infect computer systems that can then be used for large-scale attacks or anything else that the hacker may be able to sell their BotNet for. They may have their own goals or may sell their BotNet services on the Dark Web.

Once a BotNet hacker starts compromising systems, they will use those systems to scan for other vulnerable systems to add to the BotNet, which can be considered automated script kiddie hacking.

Botnets can be used for DDOS attacks against a company or even a government website, they can be used to perform a huge range of automated updates, such as selling “likes” or “comments” on social media for a price.

Who are hackers with Botnets? They are hackers automating their hacks to ultimately gain financially from an extensive network of computers.

Who are Elite Hackers?

Elite Hackers may fall into any of the other hacking categories, the difference being that they’re the best of the best and the people who find new vulnerabilities in computer systems of all kinds.

You may find that Elite Hackers work as Black Hat hackers for themselves to gain financial benefit, or they could be White Hat hackers employed by organizations to come up with new ways to hack systems that haven’t been done before.

Who are hackers that are elite? They are the hackers that create new hacks into complex systems using methods that may never have been used before.

Who are Social Engineering Hackers?

Social Engineering Hackers use verbal or written methods to gain access to systems by tricking an authorized user into giving them access to the information required.

At a basic level, a Social Engineering Hacker may call up a user of a system they want access to, pretend to be the IT department, and confirm their password. That then gives them access to the system without any technical hacking but with the same result as what a hacker wants.

Who are hackers that use social engineering? They’re people using tricks against authorized users to gain access to systems that they shouldn’t.

Should You Be Worried About Hackers?

While you shouldn’t constantly be stressing about hackers or who hackers are and what they’re doing, it’s important to be conscious of what hackers typically take advantage of so that you can perform basic steps to protect yourself.

Stay wary of what you’re doing online and set up alerts to notify you if a strange IP address accesses any of your systems, such as email or banking, so you can act quickly if you are hacked.